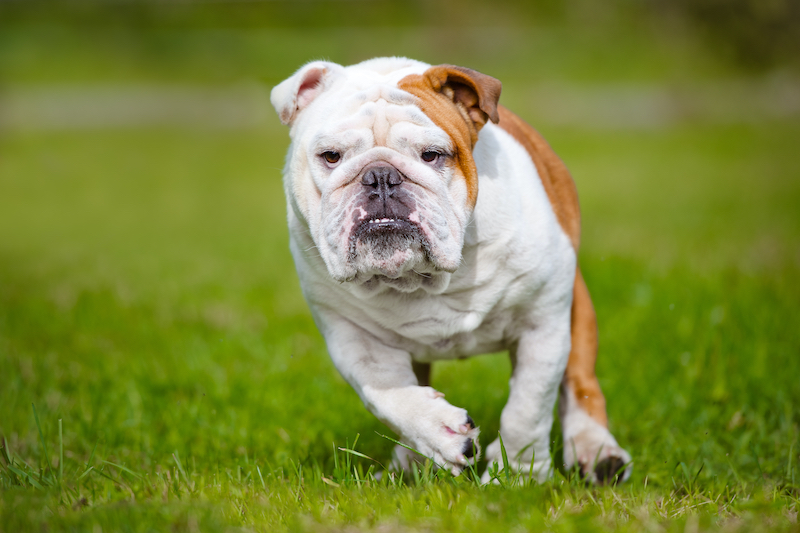 The grumpy-looking English Bulldogs are prone to a wide variety of health conditions including respiratory issues, hip dysplasia, joint problems, cardiac issues, obesity, and many others.

These health issues and physical limitations restrict their exercise routine and make long-distance running tough for them.

Are English Bulldogs Capable of Running?

English Bulldogs are among the laziest of the breeds but they still need regular exercise to stay happy and healthy. When it comes to exercise, English Bulldogs have some limitations and their exercise needs should be met within specific boundaries.

Let’s face it! Not all dogs are bred for long-distance running. English Bulldogs are capable of running and jogging but for only very short distances.

Long-distance running is not recommended for them due to their brachycephalic nature. You must ensure that the English Bulldog takes this short distance run under the right conditions and circumstances.

So, your English Bulldog is capable of running but it is not something recommended for them. The pups should never be taken for jogging as their bones are still developing and have weak joints, heart, and lungs. They can run around and play safely in the backyards.

How Many Miles should my English Bulldog Run?

English Bulldog should not be expected to run long distances and should not be allowed to run more than 30 minutes in a go. The cooler the temperature, the longer and easier they can run.

When should I take My English Bulldog Running?

Before you take your English Bulldog for running, you should be extra cautious and keep in mind a range of factors. Let’s have a look at them:

English Bulldogs have a very low tolerance for both hot and cold weather. They are vulnerable to overheating during the hot and humid climate. They are also sensitive to cold temperatures and may get a chill quickly. Don’t take your English Bulldog for running if it is over 70°F or under 47°F.

It is not recommended to take an older English Bulldog or pup for running and jogging. Puppies and older dogs are more prone to health problems.

A healthy English Bulldog should not run for more than 30 minutes, even under perfect conditions.

Slow or moderate speed is recommended for English Bulldog’s running. They are low to the ground due to short legs and can’t run at a fast pace.

The more healthy an English Bulldog is, the longer they can run.

If the circumstances are not feasible, your English Bulldog may become sick or even die.

How Many Hours a Day can My English Bulldog Run?

Your English Bulldog may not be very excited about going for physical activity, but it is important to provide regular exercise every day to keep him fit. They enjoy taking naps and love a relaxed lifestyle.

A mature and healthy English Bulldog needs 30 – 40 minutes of daily physical activity. It is better to break it up into two sessions as it will prevent your dog from health problems.

For older English Bulldogs and pups, you can meet their exercise requirements by

Be wary of weather as your furry friend has a low tolerance for extreme temperatures. They thrive with a minimal amount of jogging or other physical activities at a moderate temperature.

Observe your buddy while running. In case of noisy or labored breathing, ease him off immediately. Calm your pal and seek a veterinarian if difficulty in breathing persists.

At What Age Should English Bulldogs Start Running?

All puppies are going through growth phases until they are one year old. Most dog breeds can start running between 6 to 9 months. For English Bulldogs, things are a bit different due to their short, flat noses and stocky legs.

A usual healthy English Bulldog is ready to run short distances between 9 months and 11 months. Taking an English Bulldog pup for long-distance running may give him life-long ailments.

How do I Introduce my English Bulldog to Running?

English Bulldogs are not very active and energetic companions. There are few things that you need to know before bringing your furry pal on the trails. Let’s take a closer look at how to introduce your English Bulldog to running:

Go slow and never rush results! Your English Bulldog will take time to build strength and stamina for running. Start with very brief distances and familiar places. Slowly increase the distance and take your dog on the trail. They need training for getting used to their running routine.

For some English Bulldogs, running can be stressful. You must observe your dog and have a consistent check on his health and behavior. English Bulldogs have fragile health If your dog feels uncomfortable, just stop running and bring him home.

Where Should My English Bulldog Run?

Running or jogging is an outdoor activity. In the case of English Bulldogs, you need to be more careful about the circumstances under which they run.

The English Bulldogs may end up with a heatstroke if they run in a heated environment. They need a shaded environment to run. During summers, early morning and evenings are better timings for running.

What Other Things are Important for Running Your English Bulldog?

There are some other important things that you may need to carry when running your English Bulldog. Let’s have a look at them:

When running your English Bulldog, it is important to keep him hydrated. You can have a bowl or water pouch for your pooch when running. A well-hydrated English Bulldog will stay healthy and will have better stamina.

During summers, bring along a damp towel when running your English Bulldog. Your dog may get heated during or after running and you may need something to cool him down.

If your English Bulldog gets tired or is not feeling better during running, he will show resistance in further running. Sometimes the dogs just sit down where they are and it becomes embarrassing to push them. In such cases, you may need a dog carrier. It will make life easier for you and your pet.

What Are Some Better Alternatives for English Bulldogs Than Running?

Like all growing canines, English Bulldog pups should not be exercised too much until they reach the age of one year. Running is not the only activity to exercise your English Bulldog. English Bulldogs require 30 – 40 minutes of activity a day and you can meet their exercise requirements by:

There are tons of activities and low impact games that you can play with your English Bulldog. They can play flyball and even enjoy skateboard with their little legs. Just have a check on your dog’s physical condition and his environment.

So, do you want to go running with your English Bulldog? Well, these dogs are capable of running but it is not a recommended physical activity for an English Bulldog. They are not suitable to run long distances even under the best of conditions.

Brisk walking is a better option for them instead of running. English Bulldogs are lazy and may not be very enthusiastic about running long distances. They prefer to embrace the couch potato life!

If you want your English Bulldog to join you for a jog or run, make sure it should be a short-distance run done in the best of circumstances.

Red eyes are often a symptom of a medical problem in dogs. This describes the white of the eye, the sclera, turning pink or red. Due to their short noses and unprotected eyes, bulldogs are at a...