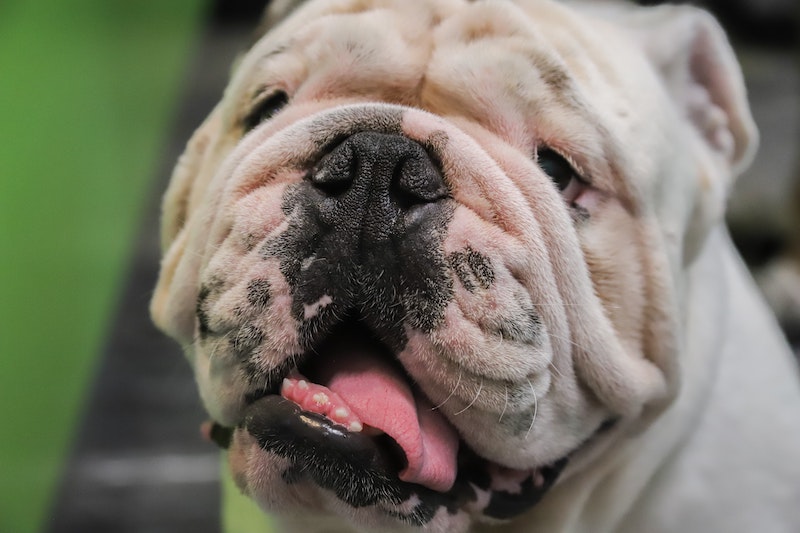 Have you ever looked at your adorable wrinkly-faced pet English Bulldog and wondered why it’s face is so squished?

The main reason English Bulldogs have faces that are so squished is that they are brachycephalic dogs. This means they have a flat face and short muzzle. Veterinarians and dog experts put this down to a genetic mutation.

That’s the short answer. Let’s look in detail at all the reasons why English Bulldogs have squished faces and the pros and cons.

Breeding History Of The English Bulldog

Let’s start at the beginning and learn about the breeding history of the English Bulldog to understand why breeders wanted the bulldog to have the features it retains today.

In England back in the 1200s the English Bulldog was bred and trained for bull baiting and bull fights. People gathered to watch the violent sport that involved the bull being tied up on a long rope and a dog being set to attack it.

The English Bulldog would attach itself to the bulls nose and attempt to defeat it. Pepper was put up the bull’s nose to enrage it before the dog entered. Sometimes the bull would win by catapulting the dog into the air using its horns.

Other times the dog would win by pinning the bull down. It was also believed the meat of the bull would be more tender after bull baiting.

The Bulldog’s flat nose helped it to bite the bull and breath while holding on for dear life. Breeders were aiming for this feature when they first breed the English Bulldog.

This horrendous blood sport continued until the mid 1800s in England and throughout Europe and was finally outlawed due to animal cruelty.

The Enduring Popularity Of English Bulldogs

Once bull baiting was made illegal breeders wanted to keep the English Bulldog around, even though its main purpose of being bred was no longer relevant. Butchers adopted the bulldogs as pets but the population was slowing diminishing.

Some breeders saw the potential in breeding bulldogs into a better breed and started breeding the bulldogs with other dogs such as Pugs which is why they have a short face today.

They aimed to bred the aggressive nature out of the bulldog and retain the cute facial features that English Bulldogs were so recognized for.

Their popularity grew again and they became a common pet. Today the English Bulldog is one of the most popular of all dog breeds in the world.

English Bulldogs can suffer from many health issues and some are related to their facial features. Careful breeding can eliminate some of the health issues which is why using a reputable breeder is essential.

A breeder that doesn’t hold professional standards or is simply inexperienced or ignorant of the issues could sell you an English Bulldog that has many health issues. Still some health issues can’t be avoided. Let’s start with the most common one.

Brachycephaly is a condition that the English Bulldog inherited and keeps today. It is caused by a mutated gene that results in the flat face and short nose. It is also common in other dog breeds with similar facial features.

Upper airway abnormalities are a result of the syndrome and cause narrow airways which can affect breathing including:

There sure is a long list of health problems that come with the squashed face and short muzzle. Basically their short snouts and flat facial features make them prone to having respiratory problems. Certain conditions such as rigorous exercise or hot weather can aggravate the health issues.

Other Health Issues To Be Aware Of

Wrinkly skin is part of what makes the bulldog’s appearance so recognizable and loved. But those rolls and wrinkles can mean bulldogs are prone to eye and ear problems. For example if moisture is trapped under the wrinkles, bacteria infections can occur.

Bulldogs find it difficult to regulate their temperature because they can’t pant well due to the squished face. This means they can easily get too hot. They need to be kept in cool temperatures at home and outdoors to avoid overheating. If your pet gets overheated you might see the following signs:

Get your dog out of the heat, drinking some water and into a cool bath or pour some cool water over its body as soon as possible. If you dog continues to show symptoms and signs of distress go to your local veterinarian for treatment.

Exercise can also cause the English Bulldog to overheat or have trouble breathing as it tries to take more air. Keep a close eye on your canine always to make sure it isn’t playing too hard.

Especially with puppies they will love to play and you might have to take them aside and enforce a time of rest to make sure they don’t overdo it. It doesn’t take much for an English Bulldog to get overexcited, walk or run too much and end up in a situation of labored breathing.

Put your dog in a quiet and cool place and give it water as it calms down. Symptoms as above could follow if your pet over exudes itself. Head to the vet if you are concerned.

Eye issues can include Cherry Eye which is a prolapsed eye gland and dry eye which occurs when the dog can’t produce enough aqueous fluid.

If Cherry Eye is treated early enough it can mean surgery isn’t necessary. Normally a vet will prescribe anti-inflammatory eye drops that will help the swelling.

If there is discharge from the eye the vet may also prescribe antibiotic eye medicine. Hopefully this will remedy the problem but often surgery will be needed. Clean your pet’s eyes with a wet cloth from time to time.

English Bulldogs have an excessive underbite which is why their bottom teeth protrude more than their front teeth. This can can lead to malocclusion which is painful and may need extraction or orthodontic treatment by your vet or a recommended specialist.

Some English Bulldogs will be unfortunate enough to suffer from all of these health issues while others might cruise through life with relative ease.

What Is Normal Behavior?

Many bulldogs will snore, grunt, wheeze and breath heavily on a daily basis. This will be their normal sounds when awake and asleep and are caused by the structure of their face and airways. The don’t bark much but they sure make up for it with all the other noises they make.

Did we mention snorting? The sound of a grumpy-faced, sturdy dog snorting brings many smiles to the pet owner and family members.

Get to know your dog’s normal sounds that it makes when breathing, both in a sleeping state and awake. If you recognize these noises you will instantly notice any change in sounds which can indicate the first stages of a health issue.

Getting your pet to the vet in the early stages of any kind of illness, especially respiratory-related ones, can make a big difference in how serious the illness becomes and also for the recovery time.

How To Care For The Wrinkles

English Bulldogs are a high-maintenance breed of dog. They require a lot of attention and care. Taking care of their health is one of the major areas the owner of an English Bulldog is responsible for.

Let’s start with those wrinkles that everyone coos over when you walk down the street.

Your dog will probably enjoy the process of detailed daily grooming. They will do some self-grooming but this area around the wrinkled skin is impossible for them to reach.

It is relying on you to take care of this wrinkle cleaning every day as well as a weekend brush of its whole body to keep the coat shiny and healthy and to spread the natural oils throughout the coat.

If your dog’s skin is sensitive or prone to infection you can buy ointment as a preventative measure from your local pet store, vet or online. Look for products that contain healing ingredients like shea butter, jojoba oil and rosemary.

As your pet bulldog gets older its skin might become more sensitive or need more attention.

Today the English Bulldog is a popular breed of dog all around the world. Even knowing the potential health issues that might come with owning a bulldog, pet owners are keener than ever to have an adorable squished-faced dog as part of the family. That face has become iconic.

Indeed English Bulldogs do make wonderful pets and loyal companions. The grumpy expressions and cute wrinkles are just an extra bonus. It’s hard not to fall in love with that cute-ugly face.

Always use a reputable breeder when you are buying an English Bulldog. Ask about health problems that may arise from the squashed face and use a breeder that is professional and supportive.

So looking at the pros of the squishy face we know it sure is cute and adorable. Its appearance is one of the reasons the English Bulldog is such a popular choice for a pet.

Not to mention its loyal and affectionate nature. It can be a little stubborn but can’t we all? English Bulldogs are lovable animals.

The cons are the health issues that often appear. It is distressing to see your dog unwell. For your dog many of the health issues discussed at the least can be uncomfortable and frightening which leads to stress. At the worst they can be painful and result in long-term illness or death.

The medical costs associated with health issues the English Bulldog might suffer are considerably high. It is recommended you take out pet insurance at the same time you buy your little puppy or dog.

Besides the health issues that come with the flat face and short muzzle there are also a host of other health problems that the English Bulldog may encounter over its expected lifetime of 7 – 10 years.

Do your research well so you can decide if the bulldog is the breed for you. If you decide to welcome an English Bulldog into your home you will make a great responsible owner to an affectionate pet.

With a well-educated care plan in place, a good breeding lineage and a little luck your English Bulldog might not suffer from health problems related to its squashed-up face.

But you should be prepared to address them if they happen as it is common for the Bulldog to have some health issues such as brachycephaly.