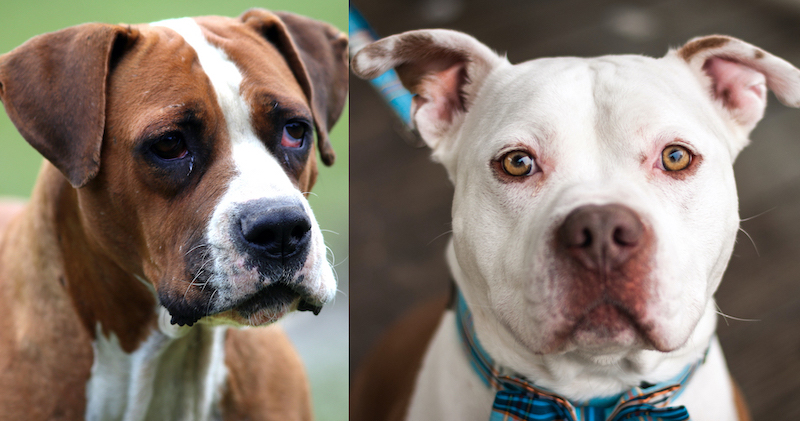 Let’s be honest. We all have mistaken a Bulldog for a Pitbull or vice versa, at least once in our lifetime. Right? However, both of these dogs are different. A Bulldog is NOT a Pitbull. They have similarities and differences. We are going to discuss them thoroughly in this post.

Let’s walk you through everything you need to know to identify a Bulldog and a Pitbull correctly.

Bulldogs hail from England. The working class brought them to the States and continued to breed them. They helped them in farming, herding cattle, and hunting pigs. These dogs assisted ranchers in protecting them and their property.

As time went by, Bulldogs became less popular. When World War II was nearing its end, this breed was almost extinct. Luckily, a few breeders still had some Bulldogs. They decided to continue breeding them, but for a different purpose. Bulldogs were bred for companion dogs rather than farm dogs.

Breeders were looking for dogs that had the strength of a Bulldog but the agility of a Terrier. That’s how Pitbulls came into being. They are a cross of Old English Bulldogs and Terriers.

The Pitbulls became popular players in the sport of bull-baiting. They also took part in dogfighting and rat killing. When these cruel activities were banned, Pitbulls became farm dogs and great family companions.

Here is a comparison chart to help you understand the similarities and differences in the history of Bulldogs and Pitbulls.

Take a look at the comparison table below to understand the attributes of Bulldogs and Pitbulls, along with realizing the differences between them.

Try testing your knowledge by going through a collection of pictures that has both, Bulldog and Pitbull. If you succeed in identifying which one is which, it will mean that this comparison table worked.

Often regarded as a large lapdog, Bulldogs are affectionate and gentle. They love their families and are generally very friendly. They have plenty of energy, good social skills, and confidence.

Bulldogs are strong-willed and brave. They can even prove to be stubborn sometimes. It is their effective training at a young age that will go a long way. They are alert and protective.

Pitbulls are commonly misunderstood due to the misconceptions spread against them. Legitimate studies show that these dogs are some of the most affectionate, tolerant, and calm dogs.

There is an amazing book written that will convince you that Pitbulls are misinterpreted for being aggressive. ‘I’m a Good Dog: Pit Bulls, America’s Most Beautiful (and Misunderstood) Pet’. Give it a read and thank me later!

Early training is needed to establish socialization in them and to undermine the fighting blood that runs in them. Pitbulls have short attention spans, so it is your responsibility to keep them from distractions during training.

How about another comparison table? This one is about the similarities and differences in the temperaments of Bulldogs and Pitbulls.

Now, you probably have a better idea about what’s common in the temperament of Bulldogs and Pitbulls.

This breed is stubborn but also has a desire to please their owner. That’s why you should adopt positive training methods that brings out their best side.

You should be assertive but praise them, pet them, and reward them with treats.

Pitbulls don’t like harsh tones. You should train them calmly yet assertively, so they know that you are the alpha.

They tend to lose interest quickly regardless of reward, so don’t push it. Lol. I mean keep in mind that the training sessions shouldn’t be stretched for long periods.

These dogs are not only extremely intelligent but also have a strong work drive that makes them trainable.

These dogs rank average to above-average in the Intelligence Index. Studies conclude that Pitbulls are likely to obey a known command on the first attempt almost 70% of the time. Also, they understand a new command by just 15 to 25 repetitions.

Remember:Both breeds are very intelligent. This is because, initially, they were bred as workers, be it on the farm or in sports. They have qualities like decision making, intelligence, absorption of commands, or tricks.

This is an athletic breed. Requiring almost 45 minutes of vigorous activity daily, Bulldogs can jog, run, hike, and even play tug-of-war. Imagine how much fun it will be playing tug-of-war with your dog?

Try to engage your Bulldog in non-impact exercises since it is prone to bone and joint damage. Lack of exercise can cause a Bulldog to show behavioral problems like aggression, destructiveness, excessive barking, etc. This is because it won’t be utilizing its energy in physical activities.

Pitbulls are considered even more energetic and vivacious than Bulldogs. Hence, they need even more exercise to exert their energy into productive activities. They should also get a minimum of 45 minutes of exercise every day.

This breed like fun activities that involve mental and physical energy. Exercise is not only essential for your Pitbull’s health but also for its overall mood and behavior. You don’t want to drive it crazy by bottling its energy inside it.

Below are few of the health problems that can occur in Bulldogs and Pitbulls:

Note: Bulldogs and Pitbulls can inherit genetic problems as well.

Finally, this is something almost entirely common in Bulldogs and Pitbulls. Let’s dive in the details on how you should groom your four-legged friend, be it a Bulldog or a Pitbull.

Since both of these breeds have short hair, grooming them is pretty simple. You should brush their coat at least once a week. Try to use a soft to medium bristle brush that will help in removing loose hair and debris as well as distributing their natural oils throughout their bodies.

You should also occasionally bathe them with dog shampoo to keep their coat clean and shiny.

Clean their ears once a month or as need be. Pitbulls have high set ears that are more exposed to infections, so cleanliness is crucial.

They are moderate shedders. They “drop their coat” when the seasons change, so that’s when they shed more.

They shed all-year-round. However, they shed more during late winter as the spring is approaching and during late fall as we enter into winter.

I understand that this post has a lot of information about Bulldogs and Pitbulls. I am sure you will benefit from it too. How about we go through it and put it in a nutshell? It will help you remember all the differences between these two dog breeds.

That’s about it. What will happen when you come across a Bulldog or a Pitbull now? Let me take a wild guess. Um, this table will pop up in your mind, and you will identify the dog within seconds. Good luck, though!