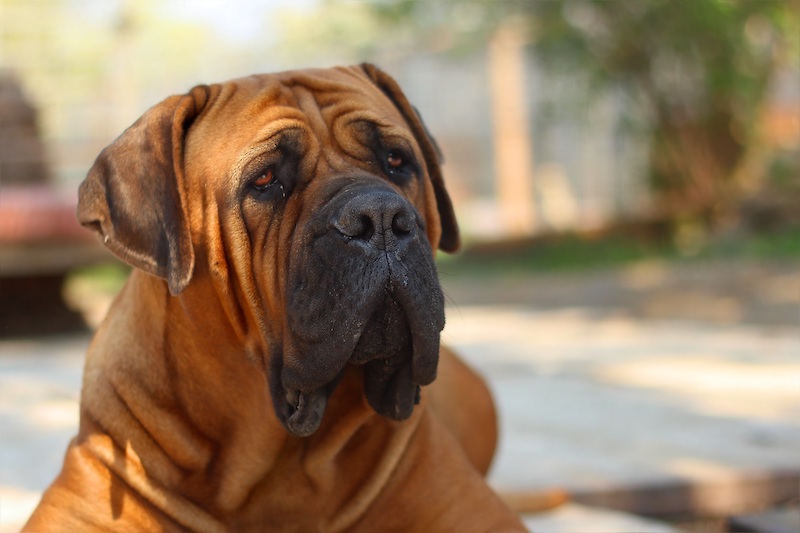 You may have heard of the American bull Dogue de Bordeaux. It is one of a few “designer” bulldog breeds that have popped up over the years since the (extinct) Old English bulldog breed arrived in the United States from Europe in the 1800s.

In this article, we will talk about the history of the parent breeds and the physical characteristics, temperament, and known health conditions of the American Bull Dogue de Bordeaux.

Where did the American bull Dogue de Bordeaux originate?

It is unknown when the first American bull Dogue de Bordeaux was born. The only history that is known is the history of the two parent breeds. Even now, there is no official documentation of the breed since it is not recognized by any major kennel clubs and has no breed registry.

The American bulldog is a descendent of the now-extinct Old English bulldog breed that was used in the 1600s and 1700s in Europe for bull-baiting. During this time, immigrants brought the breed with them to the southern United States.

In the 1700s and 1800s, there were different lineages of Old English bulldogs that were used for bull-baiting and livestock herding. As time went on, they were also bred for other purposes such as guarding and eliminating feral pigs.

The breed reached an extremely low population count in the 1930s before a few individuals made a focused effort to increase their numbers again.

John D. Johnson and Alan Scott developed two different types of American bulldogs by crossing lineages with working farm bulldogs in the south and an English bulldog type that was located in the northern United States.

Today, the American bulldog is not an officially registered breed with a major kennel club, but they are a part of the American Kennel Club Foundation Stock Service (FSS).

The FSS keeps official documentation such as pedigree information and a studbook for rare purebred breeds. It is one step in the process of a breed achieving official recognition from the AKC.

One possibility is that the breed is a descendent of mastiff ancestors that were used by Romans over 2,000 years ago for war and entertainment as fighting dogs. Other suggestions are that its ancestors were from ancient France, or that it was developed alongside mastiffs.

The Dogue de Bordeaux breed could have been found in France as early as the 1300s but was not recorded until 1897 by the United Kingdom Kennel Club.

The Kennel Club finally recognized the Dogue de Bordeaux as an official breed in 1997. Like the American bulldog, this breed experienced low population numbers at certain points in time but was revived with focused breeding efforts by a handful of individuals in the 1960s.

The breed arrived in the United States in the 1890s but did not achieve full recognition from the American Kennel Club until 2008. Over the years they have been used for cattle herding and as guard dogs.

These two breeds that we’ve discussed were bred together relatively recently and the American bull Dogue de Bordeaux was created. This cross-breed has physical and temperamental traits of both parental breeds.

What does the American Bull Dogue de Bordeaux look like?

The American bull Dogue de Bordeaux is considered a large breed where both males and females typically weigh over 100 pounds and are between 23 and 27 inches in height at the shoulder.

Their head is similar to that of other bulldog breeds as it is broad with a shorter snout, strong jaw, and loose jowls.

They have a short coat that ranges from a fawn or light tan to red. This breed may also have a “mask” of brown or black fur around their eyes and nose.

Minimal grooming is needed for this breed besides baths and regular brushing. However, it is important to keep an eye on their jowls, wrinkles, and ears to watch for any signs of infection.

What is the personality of the American bull Dogue de Bordeaux?

This breed displays characteristics of a watchdog. They are loyal to their family and brave, but stubborn and assertive. They are not a good choice of companion for inexperienced owners due to the consistent training that they require.

They can be aggressive towards other pets and need to be introduced to children at a young age in order to get along with them well. They are an active breed that requires at least an hour of daily exercise and enjoys long walks.

Since the American bull Dogue de Bordeaux is a new breed and there are no regulations on which individuals can be used for breeding, there is a possibility of the great variation in the temperament of these dogs.

While a docile and calm nature towards people is desired, it is not guaranteed. Unfortunately, the personality of the American bull Dogue de Bordeaux is not fully established and is subject to change as the breed develops.

How do you train an American bull Dogue de Bordeaux?

Like other dog breeds, the American bull Dogue de Bordeaux is best trained through positive reinforcement. Rewarding the dog through praise and treats is an effective method for training new behaviors.

Some trainers and breeders may mention the “dominance theory” and suggest that dogs may try to be the “alpha” over the owner, but this theory is outdated and incorrect.

While modern dogs are descended from wolves, they do not participate in the same hierarchal social system and they do not view humans as the same species.

Positive reinforcements, such as treats and praise, are the most effective method for training modern dog breeds that coexist with humans.

Early socialization is also essential to the development of a tolerant dog. Exposing puppies to new people and places while they are young makes them more accepting as they grow older.

In the American bull Dogue de Bordeaux breed, early introduction to children and other animals is essential to creating a positive association and acceptance as the dog matures.

It is important that early experiences of new environments are positive for puppies, as negative experiences can lead to fears and anxiety later in life.

If a puppy is scared by a person or place, remove them as quickly as possible and offer positive reinforcement. There is no benefit to reprimanding a young dog when they are anxious or scared.

What are the common health conditions of the American bull Dogue de Bordeaux?

The American bull Dogue de Bordeaux is prone to a few genetic conditions due to their ancestry. These conditions include:

Unfortunately, the American bull Dogue de Bordeaux did not avoid the health pitfalls of its ancestors, but regular veterinary visits and preventative care can help owners identify and manage genetic conditions and problems.

The American bull Dogue de Bordeaux is a new breed with an unpredictable temperament and health status. They were created to combine the best traits of two rare breeds while minimizing their health problems, but the success of both goals is unknown at this time.

This breed is best handled by experienced owners and successful trainers who know how to handle intelligent and loyal, yet stubborn, dogs.