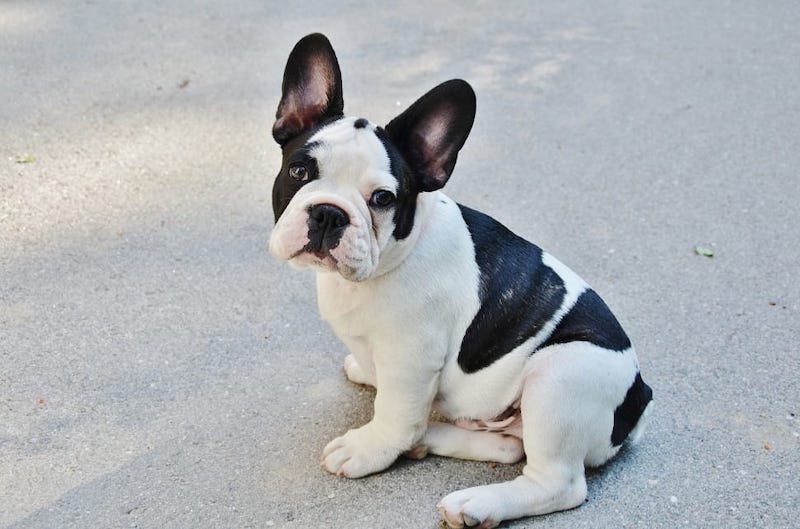 The American French Bulldog, or the Frenchie as it is fondly known, is a charming, friendly dog with a big personality.

It is a hybrid bred from the American Bulldog and French Bulldog. Taking the best qualities from those breeds, it was created to be a companion dog and watchdog.

Everyone falls in love with its wrinkly facial features and adorable eyes, not to mention its cheerful character. The American French Bulldog is a great family pet, fitting in well with its affectionate, loyal, and protective nature.

They are great with kids and animals and are very playful. With this dog around, you will always be in great company.

It can be well-suited to apartment or condo living as their energy levels are not as high as some other types of bulldogs and they don’t bark a lot. But probably it is happiest in a home with some outdoor space to run around every day.

The adult American French Bulldog usually grows to be 18-24 inches high for the male and 15 to 21 inches for the female. Weighing in on the scales, you can expect around 35 to 80 pounds and 30 to 65 pounds, respectively.

It has a large head with wide-set eyes that will win your heart in one glance. Its tail is long like a whip and its ears are bat-shaped, matching its curious nature.

This breed is brave and courageous, not usually meek or shy. It isn’t aggressive or confrontational unless provoked or threatened or sees its owner and family in possible danger.

They don’t bark a lot, so urban living can be fine without disturbing the neighbors. What noise they don’t make barking, they make up with snoring, burping, and farting. You always know your American French Bulldog is around because you can hear it creating all sorts of funny noises.

This is part of the dog’s character and most owners wouldn’t have it any other way. They are also big droolers, so you can expect to see some drool every day.

Since they love company, they will try to sleep in the same room, probably in the same bed, as their owner. If you don’t want your dog sleeping with you at night, it’s best to break the habit when it’s a puppy.

Some owners report it’s hard to sleep due to this dog’s noisy sounds (not to mention the gas smells).

The American French Bulldog doesn’t shed a lot. So your home won’t be covered in fur as long as you keep up with a regular grooming schedule.

Twice a year, the dog will shed, so at that time, more grooming will be needed. If you use a medium-bristled brush on your dog once a week, it will be sufficient.

Brush your dog’s teeth regularly from puppyhood, so it gets accustomed to it. Clean its facial wrinkles as needed and always dry the skin and fur properly to avoid infection.

It can be bathed in warm, soapy water if dirty from outdoor play but doesn’t need baths too frequently. Once every few weeks, nails can be trimmed. Once a month, ears can be cleaned or as required.

In regards to grooming, the American French Bulldog is fairly low maintenance compared to other breeds. It does enjoy being groomed because this means attention, which this dog can’t get enough of.

You should train and socialize your pet as soon as it arrives at your home. The younger you can start training, the better. This dog loves to please but also has a stubborn streak.

Since the American French Bulldog can be challenging to train it needs an owner that is patient, firm, and dedicated. Once it understands who the leader is, you can expect a well-behaved dog.

They respond well to positive reinforcement training such as dog treats, praise, and pats. Food is a big motivator for this dog but see below on the section about diet.

You might want to consider puppy training classes. If your dog develops bad habits at any stage, you will need to spend time retraining it. If you buy or adopt a senior dog, you might have to spend considerable time training and breaking pre-taught behavior.

But it will be worth the love you receive in return. Taking on a senior dog is commendable and kind, as often people desire puppies and old dogs can be left homeless for long periods.

It doesn’t need to be running, although puppies will naturally run around.

Always wait an hour after your dog’s meal before exercising or better still, exercise before feeding your dog. Many Frenchies like to sleep after eating.

Ensure your dog doesn’t overexert itself as they can overheat quickly and have breathing problems since they are a brachycephalic breed (have a flat face and short nose).

They also tire easily and will need less exercise as they grow older. A 15 – 20 minute walk each day or two shorter walks a day will be enough for this breed.

If left alone for too long, the American French Bulldog can become destructive, like many dog breeds.

You could say goodbye to your favorite shoes and find some furniture is trashed if your dog isn’t getting enough physical exercise and stimulation. It is your dog’s way of letting you know it is bored, lonely, or unhappy.

This dog loves human company. It was bred for this reason so is naturally happiest spending time with its owner and other people, including family members. You will never be lonely with the American French Bulldog around because it will joyfully stay by your side.

They can be prone to separation anxiety. It is essential to get your dog used to having some time alone, so it doesn’t become dependent on having you there all the time.

The American French Bulldog loves children and they will happily play together for hours. Never leave children alone with the dog as both sides can get excitable and noisy and accidents can happen.

You can expect your children to develop a close bond with your dog. It will be very protective over them, too which is natural.

The American French Bulldog needs a diet of high-quality protein and fat. You can buy dog food specially made for puppies, adult dogs, and seniors.

This breed is prone to putting on weight quickly, which can lead to obesity and health issues. So you need to make sure your dog has a healthy, balanced diet and isn’t overfed. Be careful of giving too many dog treats or snacks.

If you feel your dog is putting on excessive weight consult with your veterinarian for nutrition advice before the issue gets out of hand. Your vet may recommend a diet change, exercise adjustment, or a combination of both.

Always have a bowl of water available for your pet.

The American French Bulldog is sensitive to heat, so care needs to be taken, so it doesn’t overheat. In summer months, try not to go out at the peak of the day and keep your dog in the shade if possible. Even during cooler times of the day, your dog can overheat if it exercises too strenuously.

If your dog starts panting or showing signs of fatigue, enforce some rest time so it can recover.

Always carry water with you to keep your dog hydrated.

An insurance plan can be wise since you invested so much in your puppy. Medical bills can be expensive, so it’s nice to have peace of mind by having insurance, especially when your dog reaches the senior years of its life.

The exact time this bred appeared is hard to trace and there is little evidence of dates. But we know the American Bulldog has existed since around 1066 and the French Bulldog since the 19th century. So this tells us the American French Bulldog history could also date back quite far.

The American Bulldog was originally used in shocking blood sports, including bull-baiting, which was eventually banned due to animal cruelty. They remained popular as they were a useful working dog and valuable to farmers and made great companions.

The history of the French Bulldog starts in England, not France, as you might imagine. Lace makers working in Nottingham bred a miniature English Bulldog.

When they returned home, the dog became popular and the French often called it the French Bulldog. It was bred with other dogs and given the name of the Bouledogue Francais. It became trendy in Paris, France, then the world.

When the American French Bulldog was created, breeders made sure it inherited the best of both breeds. Some people wanted to change its ears and some debate ensued that eventually saw the pointy bat ears stay. It is now famous for those distinctive ears.

And so the American French Bulldog became a much-loved family pet, companion and watchdog with a medium-build. This stocky character is friendly, curious and inquisitive and adores being around people.

Buying Or Adopting Your Dog

The American French Bulldog is an expensive breed, usually ranging in price from US$3,000 for standard colors to $20,000 for exotic colors. If you see them priced cheaper, it might not be a reputable source and should be avoided. If you feel the price is too good to be true, it probably is.

Using a professional breeder who you can rely on when sourcing your puppy and throughout its life is essential. A great breeder should offer you plenty of information, advice, and answer all your questions willingly and in detail.

When researching for a breeder look for shining recommendations. Search online, ask friends and family and local vets, pet stores, and other people involved in the pet industry. Don’t rush into buying until you contact a breeder you feel is excellent and reliable.

Never buy a dog from a pet store or puppy mill. The dogs are often mistreated and can come with numerous health issues.

You may wish to consider adopting n adult or senior bulldog. There are many needing rescuing and homes.

This might require a lot more work, depending on the dog’s previous home or situation but can also be incredibly rewarding. A senior dog can be less active and not need so much exercise.

At the same time, you should find a professional veterinarian who will take care of your dog’s vaccinations and any medical issues that arise during its life.

Now you have all the information about the adorable American French Bulldog. It is a one-of-a-kind pet that is genuinely loyal, devoted, and lovable. It is expensive and high maintenance in some areas, but not in others.

So it would be best if you have a lifestyle that allows you plenty of time consistently with your bulldog. If you can do that, you will have a friend for life and many wonderful times as an American French Bulldog parent.